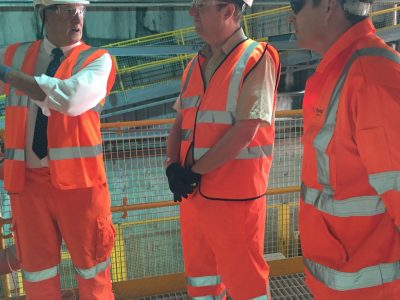 Welcome to my latest newsletter to keep you updated on my work in Parliament and around Amber Valley.

As always, you’ll find a selection of what I’ve been up to over the last few months and details of upcoming events. You’ll also find the usual information about my columns, surgeries and how to contact me.

Many constituents have recently contacted me about the status of animals as living beings. I nor any other MP believes that animals do not have feelings. There is no argument about the principle. It is self-evident that animals are sentient and UK law already recognises this fact. Indeed, the Government said the exact opposite. Minister Dominic Raab said in the debate: “Animals will continue to be recognised as sentient under domestic law.”
A specific amendment to the EU Withdrawal Bill was not deemed to be right, however the Government will deliver the same result using a different route. I have been assured by my ministerial colleagues that they are considering the right legislative vehicle. The UK has higher animal standards than any other country in Europe and in the past four months the Conservative government announced an Ivory ban, CCTV in slaughter houses, increased the maximum sentence for animal cruelty, and is banning micro-beads. Based on the Animal Welfare Act the Animal Protection Index, maintained by World Animal Protection, rates the UK’s formal recognition of animal sentience as Grade A. Other Lisbon Treaty signatories such as France, Italy and Spain do not enjoy this rating – having each received grade C.
The truth is that the current EU instrument – Article 13 – has not delivered the progress we want to see. It does not have direct effect in law – in practice its effect is unclear and it has failed to prevent practices across the EU which are cruel and painful to animals. EU rules prevent us from restricting or banning the live export of animals for slaughter, cracking down on puppy smuggling or banning the import of puppies under 6 months. Article 13 has not stopped any of these practices.
I want to see us going even further to improve animal welfare after we leave the EU. I think however that this can best be achieved with separate legislation – and not via amendments to the EU Withdrawal Bill.
You can find my full post on the topic here.

The Chancellor of the Exchequer recently announced the Autumn 2017 Budget, where he outlined his spending and fiscal plans to Parliament, introducing great measures for Brexit, savers, new home owners, drivers and business owners in Amber Valley.

I welcome the message and direction of the budget, which shows a sensible evolution of Government policy, and you can read more about some of the key measures for Amber Valley residents here.

Currently, half of the residents of Hickton Road in Swanwick don’t have access to fast or reliable internet access. So, I’ve been working with constituents to find a solution and ensure fibre broadband can be extended to all the residents on the street.

From working with Openreach and Digital Derbyshire, we now have a community fibre installation option so that Hickton Road can finally benefit from better broadband speeds. To cover the cost of Openreach installing this, affected residents on the street will need to apply for a subsidy code, through the Government and Digital Derbyshire Broadband Subsidy Scheme, which has just been extended in the Budget. If you live on the road, are suffering from a poor internet connection and haven’t already been in touch with me, please do reply to this newsletter so we can give you more details and let you know where to apply for a portion of the grant to cover the cost of the improvements.

As part of Home Office and police funding questions in the House, I again highlighted that Derbyshire Police is particularly badly affected by the current funding formula, and pushed the Minister to ensure Derbyshire Police fully benefits from the fairer funding review, and that this is introduced as soon as possible. The Government is currently consulting on the 2018-19 funding settlement, which will be released soon.

At Prime Minister’s Questions recently, I highlighted the vital work community transport providers, such as CT4TC in Amber Valley, do in connecting people and reducing isolation. I called on the Prime Minister to intervene, issue guidance and sort out the threat to the permit they use as not-for-profit providers, which threatens their services. I’m pleased that the Prime Minister clarified the situation,   confirmed that this Government remains committed to supporting community transport operators and has no intention of ending the permit system. And, to support this, the Department for Transport has recently written to all local authorities to explain how they can comply with the regulations without negatively impacting on community transport operators and passengers.

During Transport questions in the House, I asked the Minister to require train operators to allow passengers who start their journey at a station that has no ticket facilities to use a print-at-home ticket. This would benefit passengers at Langley Mill by enabling them to actually use the cheaper advance tickets that they currently cannot. I’m pleased that the Minister agreed with this, and confirmed the Department for Transport is working to ensure we can fully utilise all new methods of technology for ticketing, including paperless and barcode (mobile phone) ticketing, so hopefully Langley Mill users will be able to benefit soon.

I also recently asked the Work and Pensions Minister for an update on progress with the pensions dashboard, and I also pushed for confirmation that all pension schemes will be required to release the comprehensive data required to make this system useful for individuals. I’m pleased that the Parliamentary Under Secretary of State for Work and Pensions, Guy Opperman MP, confirmed this Government is clearly committed to delivering the dashboard, which will enable you to easily see all your pension savings at the same time, and so transform how we think about and plan retirement.

On 22nd November I held a Westminster Hall Debate on Public Country by Country Reporting, in response to the Paradise Papers and in pursuit of greater tax transparency. My colleagues and I pressed the case to the Government for the largest companies operating in the UK to publish the country-by-country reporting. This would mean we could see exactly where they are making their profits, where they have employees, where they have sales revenues and what tax they are paying on a territory-by-territory basis in all the key territories in which they operate. Although companies are already required to disclose this information privately for HMRC, public disclosure of this would make companies publically accountable and allow them to be challenged on why they are reporting large profits in territories with very few employees, very low revenue and very few assets, perhaps a suggestion that they are avoiding paying their fair share of tax. Allowing this information to be public would enable us all to make sensible buying decisions on whether we wish to use such companies. Such a move would help to change the behaviour of the largest companies and show that the UK does not believe that the use of aggressive tax avoidance, artificial structures or territories in which they have no substance, is an acceptable way to behave.

You can read the debate in full, with contributions from other colleagues and a response from the Minister, here.

Following the Paradise Papers leak, I asked the Minister to use the opportunity to progress previously discussed transparency measures such as an anti-corruption strategy and a public register of the ownership of properties here by overseas companies.

You can read the full debates on the Papers here and here, and my full post on the issue here.

In Public Accounts Committee meetings we’ve been looking into a wide range of topical issues, including tackling growing online fraud, homelessness and Government borrowing/accounts. You can read more about these inquiries and evidence sessions here, or find out more about upcoming PAC business here.

In the Northern Ireland Affairs Committee, we’ve been looking at the future of the land border following Brexit, and we’re also investigating the impact of Bombardier redundancies on the Northern Ireland economy. You can find details of the evidence sessions to date and the committee’s upcoming business here.

I also recently spoke in the Northern Ireland Budget Bill debate as an interim solution whilst we continue to work towards a better way forward. You can read my full speech, and the rest of the debate on the Bill, here.

You can find my latest Derby Telegraph column, looking at what the recent Budget means for Amber Valley residents, here.

I regularly hold surgeries to give you the opportunity to meet with me and discuss any concerns or problems you may have. These are held on Friday evenings between 5pm and 7pm.

If you would like to meet me and discuss any issues, the dates of my upcoming surgeries are: